by THE ALAN NEWS
in General News
0

On Saturday, 15th October,  2022 at the Heroes Park in   Kumasi,  Hon Alan John Kwadwo Kyerematen joined a teaming number of prominent citizens of Asanteman and NPP bigwigs at the funeral of   the late Opanin Joseph okyere Darko.

The late Opanin Okyere Darko was the father of Mr Ernest Akwasi Appiah the CEO of AMG & Enapa Ventures.

Hon. Alan Kyerematen arrived amidst cheers from a great crowd who were dazzled with the elegant presence of the soon to be first gentleman of the land. Many people took advantage of his presence to take pictures with him whiles others cheered him with words like ‘ADURUWOSO’, ‘GHANA HIA WO’ ‘ALLOW CASH IN’, among others.

The people of Kumasi were generally happy to receive Alan Kyerematen who is undoubtedly the darling boy of Asanteman.

The family of the late Opanyin Joseph Okyere Darko continued the funeral service on Sunday 16th October with a Thanksgiving service and later sat again for the rest of the funeral at the Heroes park in Kumasi.

Report By
The Great Amporfo 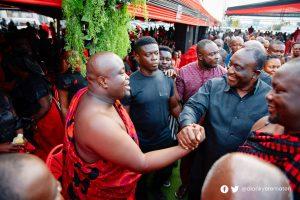 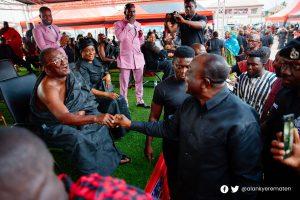