by THE ALAN NEWS
in General News
0
491
SHARES
1.4k
VIEWS
Share on FacebookShare on Twitter
BY: Emmanuel Bruce 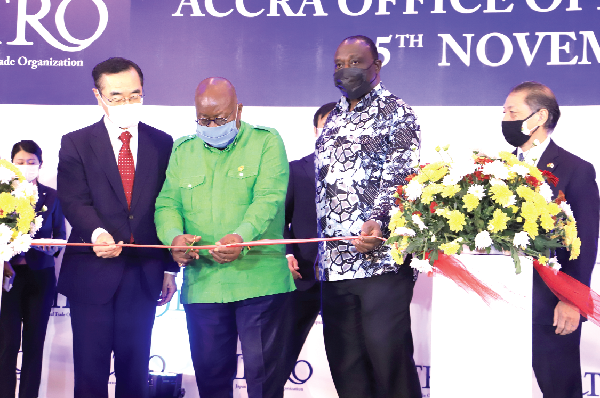 File photo: President Akufo-Addo cutting the tape for the establishment of the JETRO office in Accra. With him are Mr Alan Kyerematen (2nd from right), Minister of Trade and Industry, and Mr Nobuhiko Sasaki (left), CEO of JETRO.

The Ministry of Trade and Industry is working with the Japanese External Trade Organisation (JETRO) to attract more Japanese investments into the country.

The effort, which is expected to further grow the Ghanaian economy, follows the opening of the official office of JETRO in the country.

At the opening of the office, the Minister of Trade and Industry, Mr Alan Kyerematen, urged Japanese investors to take advantage of the numerous opportunities in the Ghanaian economy.

“The opening of the JETRO office in Ghana to promote trade and investments undoubtedly reinforces the growing confidence in the leadership of the country,” he stated.

He said the government would continue to seek measures that would enhance the productive capacity of the local private sector and position them to partner foreign investors.

The minister also noted that the opening of the office could not have come at a better time than now when the country was playing host to the Secretariat of the African Continental Free Trade Area (AfCFTA), an agreement that had ushered the African continent into an improved era of intra-regional trade.

“The location of the secretariat presents huge potential for trade, finance and investment, and it is not surprising that major global brands such as Toyota, Nissan, Volkswagen, Twitter and Google have already followed this lead and established operational offices here in Ghana,” he added.

The opening of the JETRO office, performed by President Nana Addo Dankwa Akufo-Addo, forms part of efforts to deepen economic ties between the two countries.

The office in Ghana is expected to focus on trade and investment promotion, exhibitions and business delegation in Ghana and Japan, and research and policy proposals.

As such, he said JETRO was collaborating with domestic and overseas partners to digitise its services.

He said the organisation was building systems for online business matching and utilising e-commerce.

That, he said, was to help as many companies as possible to proactively engage in overseas operations.

“We will continue our utmost efforts in developing more facilitating and active business exchange between Japan and other countries through digital transformation in various fields.

“JETRO’s role continues to include assisting not only large corporations but also small and medium-sized enterprises and producers of agricultural, forestry, fishery and food products,” he stated.

Mr Sasaki also pointed out that the organisation had been supporting investments into frontier markets where population and income levels were increasing.

He said regional revitalisation, especially vitalisation of local economies, was a major issue for Japan.

“While securing overseas sales channels for local companies and producers, we are also disseminating information on regional advantages and establishing innovation ecosystems by attracting foreign companies and human resources.

“Through these efforts, our offices established in all prefectures actively engage in bringing business opportunities with other countries into each local region in Japan,” he explained.